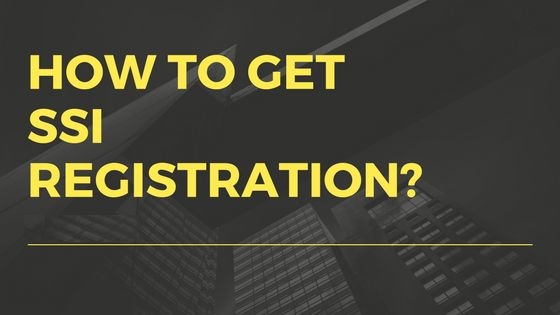 Here we are discussing about SSI registration Certificate.

SSI means Small Scale Industries. In the past five decades SSI has shown a tremendous growth. Getting started with small scale industry is a good idea, because you cannot fight with large scale industry at a stretch. With a small group of people, when you start, you will have the advantages as well. SSI registration gives some of the examples for the SSI.

They are school stationaries, toy shops, bag shops, Photo studios, Beauty parlours. Only when e business is registered, it has reputation and good followers. So the registration is provided through the Directories of Industries of State Government which is instructed by Ministry of Micro, Small and Medium Enterprises. The manufacturing enterprise and service enterprise are the most eligible forms of enterprise that can be registered.

SSI registration says that SSI was defined in the Development and Regulation Act 1951. In the year 1955 to 1960, industrialization was given preference. The small scale sectors received good reception and boosted in the year, 1960 to 1965. The small sectors were agro based industries, cottage industries.

SSI registration says the salient features of SSI. The SSI has one-ownership. Sometimes it can have the partnership also. But mostly you can enjoy the single ownership. Day to day involvement of the owner is present in the SSI. For a shop that is involved in taking photocopies let’s say a Xerox shop, the owner need not to depend upon the technology. Simply they use calculator as a device.

If the number of customers is large in number, then they hire manpower to accomplish the job. No pre booking needed through internet so labours are hired to do the job. SSI is more flexible. If you need any expansion in the business then the SSI may be expanded in various forms. The role of SSI. SSI is responsible to the development of the nation.

They can provide more employment opportunities and the standard of the people will be increased. The export of India relies upon the small scale industries. Nearly 40% of the production is accounted for the GST in India. Hence it is a useful tool for the economic growth of India.

Process and Documents required to get SSI registration Certificate

Also this certificate is needed to buy materials for construction and if applied for power you may be able to avail for such facilities. This license is valid for five years. To obtain the provisional SSI registration certificate following documents are needed. The proprietaries or the partners or the Directors have to produce three passport size photos.

They need photocopies of partnership deed, article of association and memorandum of association. Proofs of legal possession should be given. Also it requires consent of the Pollution Control Committee. All necessary clearance documents are needed and there should not be any violation of the rules in the locality where the SSI is going to be situated. Then the business is started and finally permanent SSI registration is done.

What are the administrative required to set up SSI in India.

SIDO (Small Industries Development Organization) is responsible for the implementation and monitoring of various programmes which are stated by the ministry. Also Ministry of Agro and rural industries which is the nodal agency for the contribution and development of Khadi industries is an administrative set up.

The policies and programmes are promoted through Handicrafts board, Coir board and KVIC (Khadi and Village Industries Commission). SSI registration that last but not the least, Ministry of Small Scale Industries play a major role by formulating programmes, schemes and design policies. SIDBI Small Industrial Development Bank of India is the major financial institution for promoting small scale industries. NCEUS National Commission of Enterprise in Unorganised Sector was set up in encouraging global competitiveness of small scale industries.

Recently Kerala has demanded for special package for all the small scale industries. Due to demands from the entrepreneurs like need of moratorium loans and the sanction of new loans the CM of Kerala needed special package. But out of two the new loans would be granted and that too lies in the mercy of the banks. But due to Corona outbreak, the banks are not ready to release new loans to the small scale industries.

Also in Bengal since there are many recessions big investments cannot happen. But the GDP growth of the industry is because of small scale industries in the nation. if you want to be an owner please go with the plan of small scale industry. Rather than being an employee in some other firm be an owner; you can stand on your own legs. Hence Government is also very assistive in providing your financial needs and helps in the growth.

We Smartauditor provide SSI registration in Salem, Trichy and Erode at low cost. For more details, Contact Us.